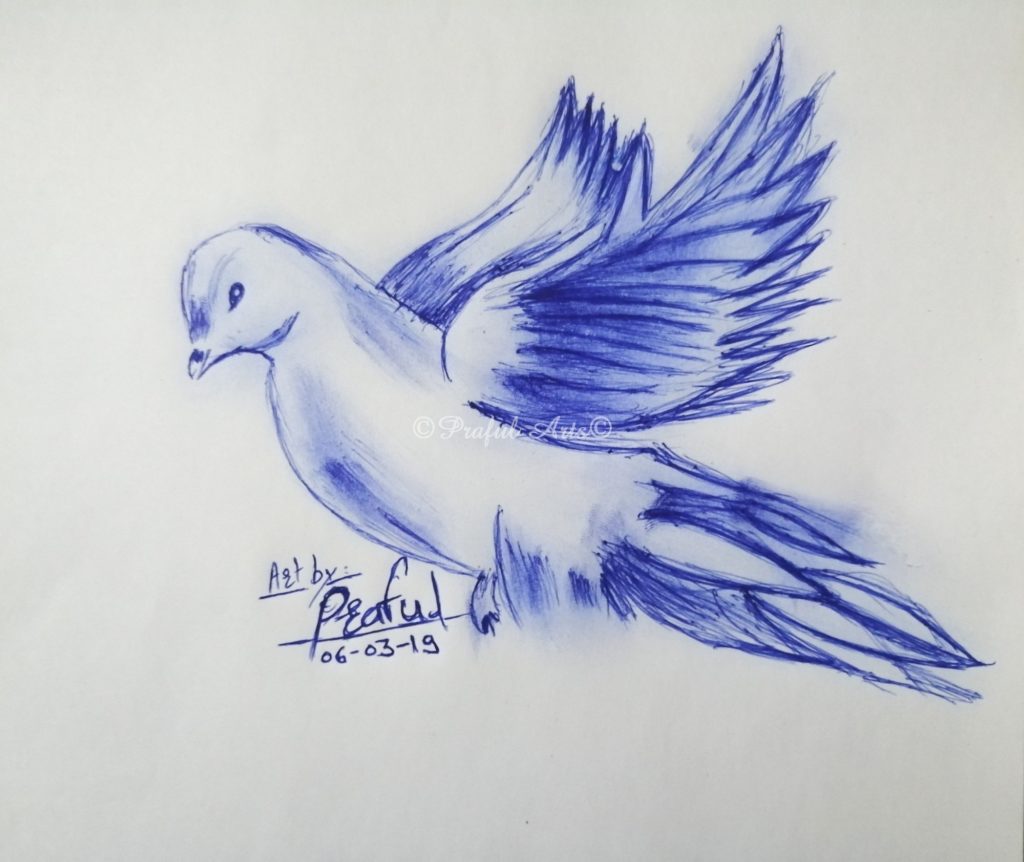 How I Draw: A Beautiful Bird

a Beautiful Bird This Drawing is one of my best Drawing that I Draw on A4 size white paper with using a Blue pen and nothing else.

It was a tough drawing to draw in one chance without mistakes still did little mistakes but I was able to manage those mistakes and made it beautiful Drawing.

It took me to draw this drawing almost 40-50 minutes, I draw it without taking a break, Pause.

The whole Drawing I Draw using one Blue Ball Point Pen. It was tough to Draw but manage it to Draw a Beautiful Bird.

I draw This Drawing on 06 March 2019 at evening time, I was seating in a bedroom while windows open and I saw beautiful birds were seating on my window that time I feel like I should Draw Bird Drawing then I Started and I Finished a Beautiful Bird.

A bird is a creature with feathers and wings, Most of the birds can Fly, Female birds lay Egg.

Birds are large Group of animal they can Fly around the world, They are Vertebrates that means they have a Backbones and they are also warm-blooded.

All Birds have wings that give them an ability to fly. Most of the birds can Fly not all of them.

All Birds have 2 legs, Wings and Feathers a bill and they lay eggs.

Birds are more in size from tiny bee hummingbird like only  5 cm in length and highest is like the Ostrich around 2.75 Meters like almost 9 feet tall.

There are more than 10400 species of birds in this earth or in this world, Birds can be found everywhere on earth.

Birds eat many different types of food some of them eat fish, some eat meat and some eat seeds, Fruits, etc.

Most birds can Fly but not all of the birds can fly like Penguin use their wings to help them swim instead.

Some other birds like Ostrich they don’t need to fly because they can run so fast.

Birds are some of the most colourfull animals on earth.

Because of Birds Wright Brothers were able to create an airplane like Bird Shape,

The First airplane flying on 17 December 1903, they made it because of while watching Bird Flying in air.

Because of birds, humans were able to send messages to other city people, through a Bird.

nowadays we have the technology developed that’s why we don’t need birds to send messages but,

It is a fact that we were using birds to send messages to another person through a bird.

Before Technology came in our life that time means like early in the ’90s  and before that human always uses birds to send messages to another person via a bird.

Birds were used to send messages mostly in the war to say that stay alert that time kings people always used to use a bird to send important messages some secret messages via a bird.

Birds were used to send letters to another person whoever that person is want to send a letter they used to tie letter ina bird leg and they sent message to the other person.

Birds were very useful early in the 90s but nowadays human developed technology so they don’t need birds to send messages to other people,

now they can send via email through the internet, that becomes easier now.

Some of the birds are able to talk like humans they can actually speak words like a human.

For example, we have seen a Parrot is able to talk like a human.

Parrot is the bird if you teach them a word to speak they learn it and also able to speak those words.

We need to save birds because birds population is decreasing nowadays and that happens because of the technology that humanity has developed.

Because of increasing, Technology birds population is decreasing.

birds die because of mobile tower, signals because of that birds are getting affecting and many of birds died.

Before the mobile technology developed, there was always Chimney swift sound heard in the morning but that becomes decreasing nowadays because of technologies.

Birds are dying because of technology human needs to save Birds.