Story of A Village Milkman 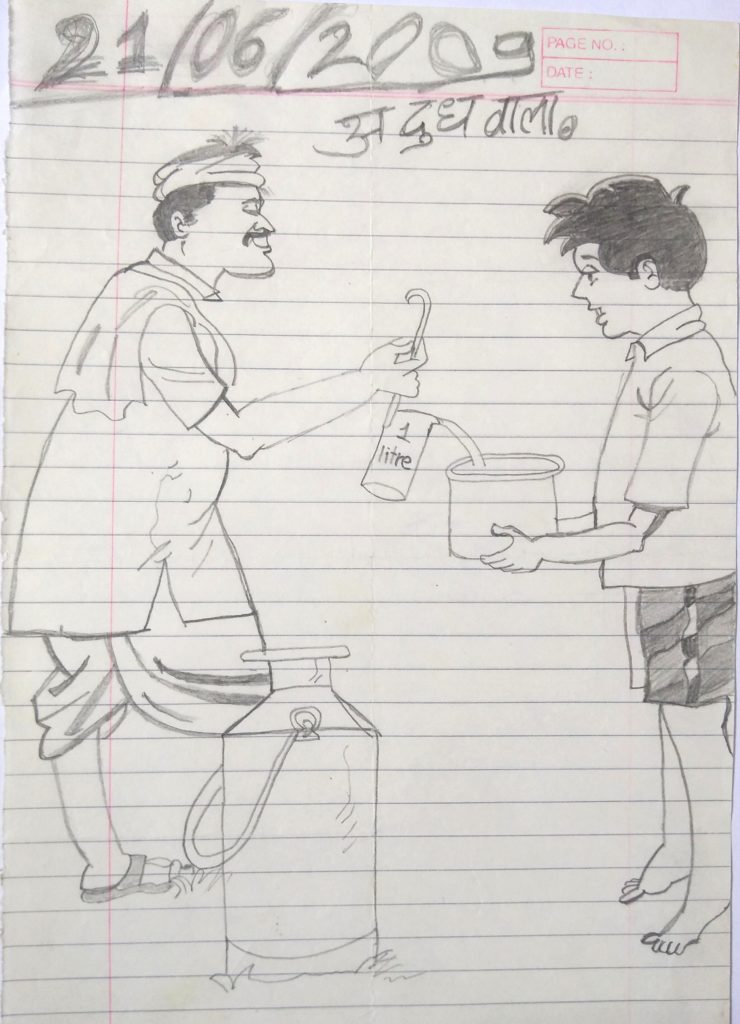 Story of A Village Milkman :

This Drawing is a Beautiful Story of a Village Milkman. this is a story a village man named Ramu Kaka.

Ramu Kaka is a farmer he has 3 cows and all 3 cows produce lots of a milk everything was going great for Ramu kaka.

Ramu kaka has 2 kids which are in 1 boy and 1 girl both are 9-8 years old and his Wife they were living a happy Life so much enjoyment everything was happy.

get Greedy for money he wanted that money, he thinks if this offer goes then he will not get that much money offer so Ramu agrees to sell his one of the Cow for 50000 Rupees to the buyer so some bargaining did then finally Ramu kaka sell His 1 Cow to 45000 Rupees to buyer that time 45000 rupees money was so much bigger amount for Ramu kaka.

Ramu kaka now has 2 cows still his life is going good because his 2 cows are producing lots of milk so he can manage everything by selling the milk.

Ramu kaka had 2 kids so the kids always wanting to give them gifts, some clothes, games so his kids demanding to him to buy them,

Ramu kaka was not able to give them everything because of money he doesn’t have that much money to afford games clothes and other expenses because he has to run the whole family and he has to feed them so money was a problem in front of Ramu kaka.

That man who bought his 1 Cow his life is going good because of Ramu Kaka’s Cow,

A cow is Producing lots of milk and that man is selling those milk so his life becomes much better than the previous life.

So seeing that man Life while other villagers thinking to buy Ramu Kaka’s Cows so some of Villagers went to Ramu kaka and tell him that they want to buy his Cows and this time villagers are giving to Double Price more than the cow he sold before.

Ramu gets Greedy towards amounts of money because he thinks if that money he gets so he can able to buy games and clothes for his kids so he decided to sell his 1 cow out of 2 cows.

so the cow betting is on Ramu kaka said whoever gives me more money the cow will go to him so betting is started, people going crazy to buy his cow some were betting for 1 lakhs some of them betting for 1.3 lakhs, Ramu didn’t think that he will get that much price for his 1 cow so he gets more greedy toward money so he said to buyers this cow will sell above 1.5 Lakhs he thought it is much more amount to sell but buyer still crazy to buy cow some of them betting on 1.7 lakhs Ramu didn’t think that he will get more amount than 1.5 lakhs but people wanted to buy that cow because of the cow milk so another man Betting for 2 lakhs and finally Ramu sold his cow for 2 lakhs Ramu is happy because he didn’t think he will get 2 Lakhs for his cow Ramu was happy for money.

Ramu Gets Difficulties in life :

Now Ramu has only one Cow Remaining after selling his 2nd cow his life becomes happy for a while but day by day he didn’t realize that his money is finishing he thought his life will become happier but the thing is happening after a month his life becomes difficult because money was not enough to survive,

His life Becomes Difficult day by day and again kids demanding to him buy new clothes, game, etc. he didn’t have money to give worker payment day by day his worker also leaving him because of money.

Now Ramu is working himself because all worker leaves him so now Ramu has 1 cow and that Cow milk now Ramu is selling on a bicycle by going everyone home.

Ramu Realise that selling cows for some big amount of money was a mistake.

Story of a Milkman :

This is Drawing about a Story of a Milkman who was living a happy life but for Greedy some needy of amounts of money that his life gets difficult this is the Drawing all about a story Behind The Drawing hope you like. This Drawing I Drew in 21-jun-2009.

“Greed is a bottomless pit which exhausts the person in an endless effort to satisfy the need without ever reaching satisfaction.”