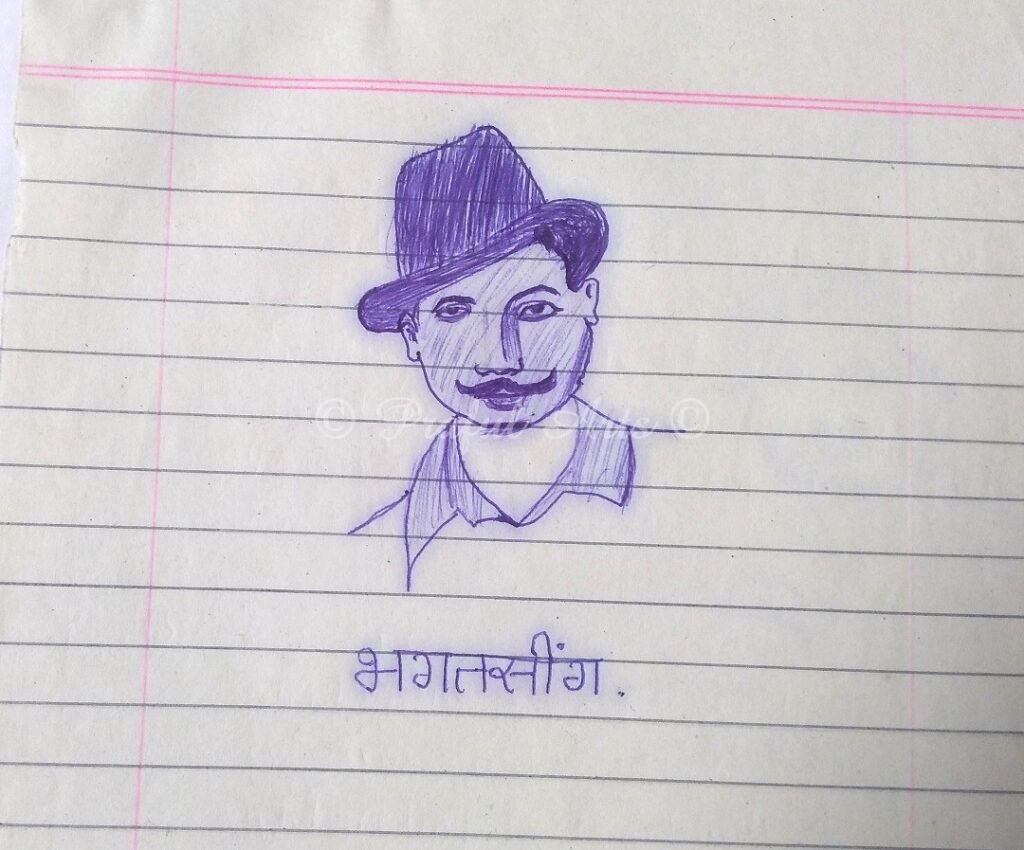 Bhagat Singh was born on 28th Sept 1907 at Banga in the Lyallpur district of the Punjab Province.

Bhagat Singh was an Indian Socialist Revolutionary, His two acts of Dramatic Violence against the British and his Execution at age 23 these two acts made him a folk Hero of the Indian Independence Movement.

When Bhagat Singh was Born That Time His Father and Two uncles, Ajit Singh and Swaran Sing release from Jail.

When Bhagat Singh Was 12 years old (1919), he visited the site of the Jallianwala Bagh Massacre hours after thousand of unarmed people gathered at a public meeting had been killed.

When Bhaggat singh was 14 year old (1921) he was one of those in his village who welcomed protesters against the killing of large number of unarmed people at Gurudara Nankana Sahib on 20th Feb 1921.

Bhagat Singh joined the National College in Lahor in 1923, In college he Participated in extra-curricular activities like the dramatics society.

Bhagat singh won an essay competition set by the Punjab Hindi Sahitya Sammelan, writting on the problems in the Punjab.

Bhagat Singh ran away from home because to avoid an Arranged Marriage, He left a lletter in home in that Bhagat Singh Said.

“My life has been dedicated to the noblest cause, that of the freedom of the country. Therefore, there is no rest or worldly desire that can lure me now.”

Bhagat Singh conspired with revolutionaries like Shivram Rajguru, Sukhdev Thapar, and Chandrashekhar Azad to kill Scott.
The plotters shot John P. Saunders, an Assistant Superintendent of Police, as He was leaving the District Police Headquarters in Lahore on 17 December 1928.

Bhagat Singh did not become popular because of his act of terrorism but because he seemed to vindicate, for the moment, the honour of Lala Lajpat Rai, and through him of the nation. He became a symbol, the act was forgotten, the symbol remained, and within a few months each town and village of the Punjab, and to a lesser extent in the rest of northern India, resounded with his name. Innumerable songs grew about him and the popularity that the man achieved was something amazing

The HSRA leadership was initially opposed to Bhagat’s participation in the bombing because they were certain that his prior involvement in the Saunders shooting meant that his arrest would ultimately result in his execution.
However, Bhagat Singh and his friends eventually decided that he was their most suitable candidate.

On 8 April 1929, Bhagat Singh, accompanied by Batukeshwar Dutt, threw two bombs into the Assembly chamber from its public gallery while it was in session.

The bombs had been designed not to kill, but some members, including George Ernest Schuster, the finance member of the Viceroy’s Executive Council, were injured.

The smoke from the bombs filled the Assembly so that Singh and Dutt could probably have escaped in the confusion had they wished. Instead, they stayed shouting the slogan “Inquilab Zindabad!” (“Long Live the Revolution”) and threw leaflets. The two men were arrested and subsequently moved through a series of jails in Delhi.